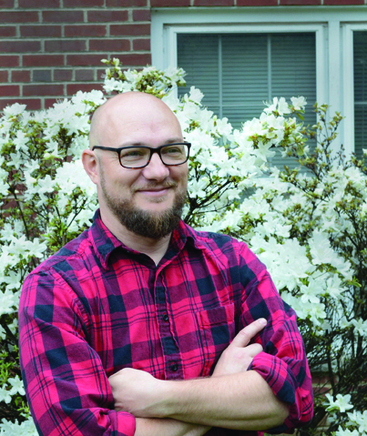 “Mike Malbrough is an author and illustrator originally from Reisterstown, Maryland. Mike began his yarn-spinning career as a puppet-maker and performer with a small family-oriented theatre in his hometown.

Since then Mike has cobbled together a creative career that has spanned 20 years. Mike has designed and illustrated, trees, robots, monsters, video games, hip-hop clothing, pet grooming logos, retiring coworkers and cute animals both stuffed and real. Mike’s winding road of doodling and artistry finally brought him back home to where his journey began, telling stories for kids and families.

Mike is the creator of MARIGOLD BAKES A CAKE (Philomel) and its 2019 sequel MARIGOLD FINDS THE MAGIC WORDS: A PLEASE AND THANK YOU STORY, as well as the illustrator on several upcoming books including YOU MADE ME A DAD (HarperCollins, Winter 2019) and the Warren & Dragon Chapter book series (Viking, August 2018.)

Mike lives in Northern New Jersey with his wife, two children and Agnes the Cat who used to hate him, but now won’t leave him alone.”