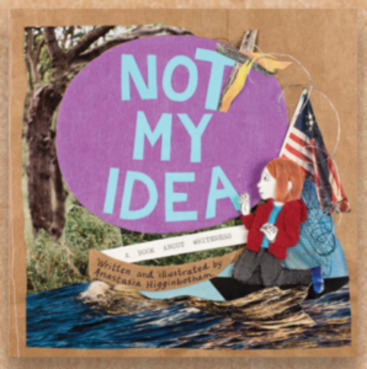 People of color are eager for white people to deal with their racial ignorance.

White people are desperate for an affirmative role in racial justice.

Not My Idea: A Book About Whiteness helps with conversations the nation is, just now, finally starting to have.

Not My Idea: A Book About Whiteness is a a picture book that invites white children and parents to become curious about racism, accept that it’s real, and cultivate justice.“Quite frankly, the first book I’ve seen that provides an honest explanation for kids about the state of race in America today.” —Elizabeth Bird, librarianNAMED ONE OF SCHOOL LIBRARY JOURNAL’S BEST BOOKS OF 2018

“A much-needed title that provides a strong foundation for critical discussions of white people and racism, particularly for young audiences. Recommended for all collections.” —SCHOOL LIBRARY JOURNAL (*Starred Review)

“A necessary children’s book about whiteness, white supremacy, and resistance… Important, accessible, needed.”—KIRKUS REVIEWS “A timely story that addresses racism, civic responsibility, and the concept of whiteness.” —FOREWORD REVIEWS“For white folks who aren’t sure how to talk to their kids about race, this book is the perfect beginning.”—O MAGAZINE“I am in love with Not My Idea, and with Higginbotham’s direct, radical, compassionate approach to talking about whiteness, racism, and the need to tell painful but important truths.” —KATE SCHATZ, NYT-bestselling author of Rad American Women A–Z, Rad Women Worldwide, and Rad Girls Can“Anastasia Higginbotham is a children’s book author and illustrator, not an athlete, but to teach kids to stand up against racism, she’s taking a knee next to Colin Kaepernick.”—FORUM“Higginbotham is silently asking her readers to be more aware of everything around them…she is able to take control of the narrative and answer questions that expand on what little the child can gleam from adults.”—MEL SCHUIT, blogger at Let’s Talk Picture Books“Anastasia’s books are works of love and urgency…She’s doing the work that few have tried.”—GREG O’LOUGHLIN, founder of The Educators’ Cooperative

MORE ABOUT the critically-acclaimed Ordinary Terrible Things series by Anastasia Higginbotham:“It’s that exact mix of true-to-life humor and unflinching honesty that makes Higginbotham’s book work so well…”—PUBLISHERS WEEKLY (*Starred Review)“A beautiful assemblage of a book — as if Romare Bearden himself rose from the dead and created a sequel to Alexander and the Terrible, Horrible, No Good, Very Bad Day.”—COURTNEY E. MARTIN, columnist for On Being